An impending decision by the Trump administration is weighing heavily on the U.S. solar industry. The potential tariff on solar panels would not only take away American jobs, but would hinder the thunderous growth of the industry, wrote Colorado State University Professor of Economics Edward Barbier and Associate Professor of Economics Terry Iverson in The Conversation.

According to the two economists, there are better ways to further innovation within the sector while saving jobs at the same time.

The current state of the industry
At present, the solar industry employs 260,000 people across the country and is estimated to be worth $29 billion, according to Real Clean Energy. Of those jobs, less than 1,000 would be protected under the proposed tariffs. Moreover, the limited number of secured jobs would be in low-value parts of the supply chain, under cell and panel manufacturing. The installment of new utility-scale would fall by a rate of 9 percent, while residential solar would drop by 8 percent.

"The solar industry is estimated to be worth $29 billion."

While the government wants to increase the cost of imported solar panels, that decision would risk slowing the expected growth of employment within the industry. Such a move would diminish demand, while at the same time make the move to this renewable source that much more expensive, explained The Conversation. This is problematic for job outlooks as more than 50 percent of solar industry careers are within installation.

In the Occupational Outlook Handbook, the U.S. Bureau of Labor Statistics listed solar photovoltaic installers as the career with the highest projected employment change between 2016 and 2026. Over the next nine years, job growth in this specific field is predicted to increase by 105 percent.

Currently, there are 11,300 Americans working in solar installation. As Barbier and Iverson explained, if the U.S. trade commission decides against the tariffs, the number of employees in this sector would more than double by 2026, to 23,000 workers.

While they do support nation-based solar panel manufacturing, rather than increase the cost of imports, Barbier and Iverson believe the government should mimic the strategy of the Chinese. This means manufacturing propelled by scale and supply-chain development, and methods that keep costs down such as loans with low interest. Building on cheap land is another means of saving jobs and furthering the growth of the solar industry.

The outlook for solar panel installers
According to Big Think, the Obama administration had given the approval on 60 renewable energy projects. While questions remain as to whether or not these will be seen to fruition, Dec. 17 saw at least one large-scale solar project come to completion. Two newly opened solar power plants - Switch 1 and Switch 2 - have resulted in hundreds of jobs with good pay, reported the source. Built on federal land in Clark County, Nevada, the plants cover 1,797 acres and host 1,980,840 solar panels. EDF Energy will run the plants, which were built by First Solar.

"EDF RE is positioned to invest $3 billion between now and 2020 in renewable projects across the country; we anticipate to deliver on our projection and bring more jobs, tax dollars and investment to Nevada," said EDF executive Cliff Graham.

Despite the looming deadline, BLM Nevada director John Ruhs told the Washington Post that the administration is in full support of the "all the above" energy policy. Moreover, he said that the solar plant was just the first of many across Nevada and California as well, according to the Big Think.

The solar sector is not the only renewable energy industry forecast to see significant occupation growth within the next 10 years. The BLS outlook put wind turbine service technicians in the No. 2 spot, with a forecast growth rate of 96 percent. 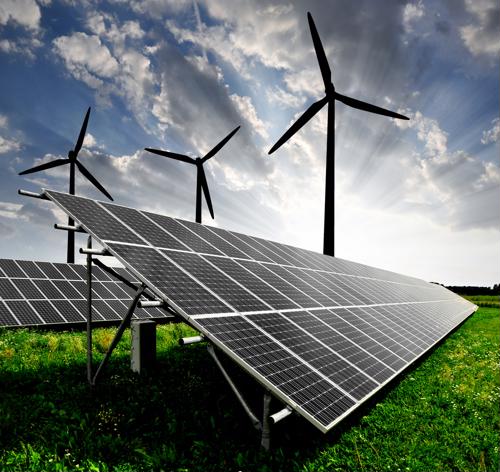