Anthem IT hub in Atlanta will create 1,800 jobs

Major health benefits company Anthem Inc. recently announced that it plans to build an "information technology hub" in Atlanta, according to a press release.

The IT hub will support the company in providing "next-generation IT strategy of modernization, digitization and innovation" to customers and will create 1,800 jobs in Georgia. Employees at the hub will coordinate with the recently-opened Anthem Innovation Studio, also located in Atlanta.

Some $20 million will be invested by the company in the new center.

Many of the new jobs will be software and corporate positions, The Atlanta Journal-Constitution reported.

The news comes as Georgia continues to build its reputation as the "Silicon Valley of the South," as Gov. Nathan Deal called the state during a press conference. According to AJC, plans for 18 new or expanded technology centers in Georgia have been announced this year. Chris Carr, the state economic development chief, said that these new centers would translate into 4,500 new tech jobs for the state.

Anthem is the parent company of Blue Cross Blue Shield of Georgia, which is the largest health insurance company in the state, with more than 70 million customers, AJC noted. 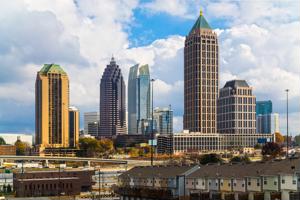