HP to purchase Samsung printer business to "disrupt and reinvent"

For HP, this marks the largest printer purchase in company history, reported The Verge. The recently created printer business of Samsung will sell 100 percent of its stake to the California-based software company.

According to HP, the plan is disrupt the copier industry, valued at $55 billion, which it says has not seen an upheaval in decades.

"Copiers are outdated, complicated machines with dozens of replaceable parts requiring inefficient service and maintenance agreements," the company said in a press release. "Customers are frequently frustrated with the number of visits needed to keep copier machines functioning. Today, HP is investing to disrupt this category by replacing copiers with superior multifunction printer technology."

The deal comes just 10 months after Hewlett-Packard split into two entirely new companies: Hewlett Packard Enterprise and HP, according to Venture Beat. Recently released figures from Q3 earnings beat predictions as newly formed HP pulled in $12 billion in revenue. Though printer revenue was down since the year previous, HP plans to recreate the industry with a focus on security and efficiency.

According to Samsung, the deal is anticipated to finalize within one year. 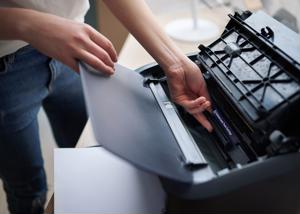