Longer Tenures Create Opportunities for Workers and Challenges for Employers

It's become gospel in recent years that workers jump from job to job to job. Some reports say that the average person entering the workforce today will go through as many as 20 jobs in a career. It's been cited as a symptom of a new crop of workers who avoid committing to a single employer for more than a few years. Job hopping has become so mainstream that staying with a single company for more than three or four years now needs to be justified with evidence of accomplishments and career advancement, much in the way job hopping has had to have justification behind it.

It's a trend that was true of male workers from the early 1980's through the late 1990's. In that time frame, the current tenure of wage and salaried male employees over 25 years old fell from 5.9 years to 4.9 years. Since 2002, however, the median male tenure actually grew from 4.9 to 5.5 years. Over that same period, the median tenure of women grew from 4.4 years to 5.4 years-tenures of women had also grown in the decade and a half when male tenures were falling, but that is largely attributable to a change in the career mix of women that began to favor longer-tenure professions. 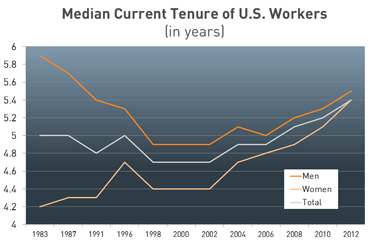 "The 1980's and 90's was a period filled with tremendous opportunity, when employees discovered the power of being free agents and the salary advantages of changing jobs. Since the turn of the millennium, though, the economy has been markedly less stable, and employees have been less likely to seek out unnecessary instability by changing positions," says Rob Romaine, president of MRINetwork.

While consistent tenures of less than three or four years can still cause negative perceptions, being open to changing careers in a slow economy like today's can be an effective way to jumpstart a career. During the recession many employees took on added responsibilities without receiving a promotion, and those who did see promotion often saw them in title only. The slow economy caused annual salary adjustments to stay in the low single-digit percentages, yet job changers who succeeded at adding value to their organizations throughout the recession can now find salary increases of 10 or 20 percent or more with new employers.

"In sectors of the economy that have reached, or even far surpassed their pre-recession levels, like technical consulting, accounting, or healthcare, rising tenure can mean even fewer experienced candidates are available for mid-career opportunities," notes Romaine. "But, it also means that opportunities for those willing to change positions will be both more plentiful, and have more potential for reward."

Median tenure for the healthcare industry over the last decade has increased from 3.5 to 4.4 years, lengthening by three-tenths of a year just since 2010. Professional and technical services median tenure has grown even more-from 3.1 to 4.4 years since 2002.
For employers trying to find top performers, workers staying in their positions longer means simply finding them becomes more difficult. The longer someone isn't actively in the job market, the older and more out of date their discoverable footprints become. LinkedIn profiles go unmaintained. Resumes in databases grow so old they are irrelevant.

"Finding top talent that isn't trying to be found requires constant surveillance and proactive network-building. There is nothing automated about the process and it's challenging for an internal recruiting apparatus to proactively build a pipeline for key positions that a company may only be hiring for every few years," notes Romaine.