A new report from research group Software.org of the BSA Foundation explored the vast economic and employment impacts of the software industry in the U.S.

The software industry contributed a more than $1.14 trillion to total U.S. value-added gross domestic product in 2016, which is a 6.4 percent increase in two years.

"Software innovation is now poised to magnify, multiply, and exponentially increase opportunities far beyond the IT sector alone because it produces a powerful ripple effect that magnifies opportunities throughout the entire economy," noted the report's executive summary.

The software industry directly created 2.9 million jobs, a 14.6 percent increase since 2014. When indirect and induced impacts are taken into account, the industry has created 10.5 million jobs.

California's software industry contributed the most to the GDP, at $124.7 billion, followed by New York at $49.1 billion. However, direct value-added GDP from the software industry increased by more than 20 percent in 35 states, with increases greater than 40 percent in North Carolina and Idaho.

The software industry is growing outside of Silicon Valley, with many states seeing the development of their own tech hubs, Recode noted. The report found that Kansas was the No. 1 U.S. state for percentage increase in software employment between 2014 and 2016, with employment up 38 percent. Indiana was No. 2, with 32 percent employment growth in the sector during this time frame. 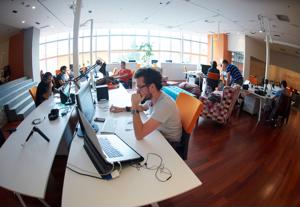