As artificial intelligence, the Internet of Things and a host of other technologies rapidly advance, demand is growing for engineers with the applicable skills.

Interesting Engineering recently released its list of the top five engineering jobs of the future, noting that advancing technologies are creating a "brand new Industrial Revolution."

Robot programmer has gotten particular attention as an in-demand profession, with TechRepublic recently dubbing the position "the next big job in tech."

The National Robotics Education Foundation forecast that there will be nearly 500,000 job openings for robotics-related positions by 2020, as noted in its press release. Currently, it estimates that there are upwards of 150,000 available job openings.

In addition, 81 percent of corporate executives thought that robotics would create the most jobs for youth in the U.S., according a poll by the NREF.

iRobot engineer Phil Mass, who worked on the Roomba, told TechRepublic that it is important that companies hiring robotic programmers have an organizational culture that encourages collaboration.

"Don't isolate them," he said in the interview. "From my experience, some problems in robotics can only be solved by a clever combination of software, electronics and mechanical design. 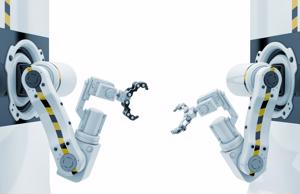