Wireless carrier Verizon has purchased a small startup as part of an effort to grow its consumer internet and media business.

The acquisition of Sensity Systems is expected to close by the last quarter of 2016, though the financial specifics have not yet been revealed, according to Tech Crunch. The deal comes as part of the growing endeavor to enhance the other entity of Verizon, ThingSpace: its Internet of Things "smart city" business.

The startup, Sensity Systems, has created a method for converting older lighting systems to connected LED systems for businesses, airports, shopping centers, streets and more. It has already gained close to $75 million from investors including GE and Cisco Systems.

According to Venture Beat, Sensity Systems has already installed energy-efficient LED lighting systems to 42 "smart cities" around the world. The systems, backed by a high-bandwidth wireless network, will allow lighting owners to enable networking technology, which can use sensors to detect wind, air quality, temperature, ambient light, moisture, seismic activity and radiation.

"Sensity is a leading provider of IoT solutions for smart communities with a strong ecosystem of partners, and this transaction will accelerate the deployment of large-scale implementations that will drive the digital transformation of cities, universities and venues," said senior vice president for enterprise products and IoT at Verizon, Mike Lanman, in a press release. 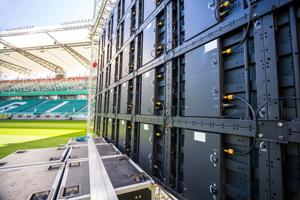